The Pomi-T  trial
Presented at ASCO

The polyphenol rich whole food supplement Pomi-T® proven to have a direct anti-cancer effect in men with prostate cancer.

Financial supported was provided by the charity Prostate Action and the Primrose Oncology Research Fund. It received no commercial funding.

The randomisation process was outsourced and independently audited by an external agency to ensure adherence to European Good Clinical Practice Guidelines. The data was externally audited before independent analysis at Cranfield University.

Polyphenol-rich foods such as pomegranate, green tea, turmeric and broccoli, have demonstrated anti-cancer effects in laboratory studies. In humans, observational studies have linked their intake to a lower risk of chronic disease, including cancer. Concentrating these foods into a capsule is a convenient way to boost an individual’s polyphenol intake but, hitherto, clinical studies have not firmly established that these benefit health or change markers of cancer progression. Men with prostate cancer, managed with active surveillance (AS) or watchful waiting for a PSA relapse after radical treatments, are an ideal cohort to evaluate a lifestyle intervention as they have a useful serum marker of their disease (the PSA). Furthermore, these men appear to have a great interest in self-help remedies, as reports indicate that 50-70% of men with prostate cancer take over-the-counter supplements.

Aims of this study

To determine whether a polyphenol-rich food pill influenced the rate of PSA progression.

The researchers recruited 203 men aged 53 to 89 years with prostate cancer proven by biopsy.  59% of the men had not yet undergone any treatment and were being followed closely with periodic PSA tests (Active surveillance), while 41% had already had a radical intervention (radiotherapy or surgery and radiotherapy) but had relapsed with significantly climbing PSA levels.  Men were randomly assigned to receive either the twice-daily oral capsule containing a blend of purified, polyphenol-rich whole foods, or a similar-looking placebo for 6 months. At baseline, there were no significant differences between the two groups. Neither the doctors supervising the trial, the men involved or statisticians analysing the data knew which men were taking a placebo or the Pomi-T. 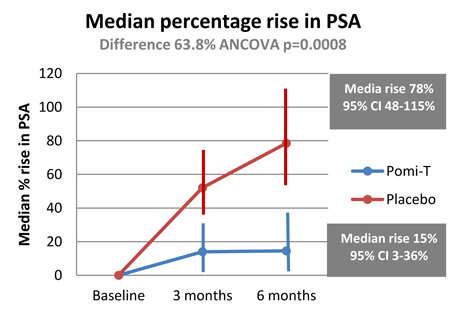 Percentage of men having a stable or a lower PSA at the end of the study: At trial completion, the number of men with a stable PSA or a lower PSA was 61 (46%) in the Pomi-T group, compared to 9 (14%) in the placebo group. This difference was statistically significant (Chi-squared value with 1 degree of freedom = 19.58, p=0.000010). 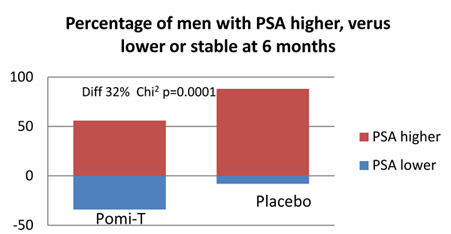 Percentage of men in whom Pomi-T prevented a change in management: 114 (92.6%) men in the Pomi-T group continued surveillance or WW at the end of their involvement in the study, as opposed to 38 (74%) in the placebo group. This difference of 18.6% was statistically significant (p=0.01). 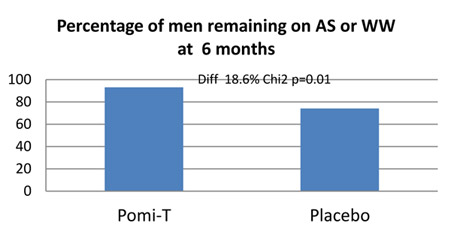 Subgroup analysis: There was no significant difference in the median change in PSA from baseline to 6 months in either the Pomi-T or placebo group between any of the pre-determined subgroups (BMI, Gleason grade, age or treatment category). There were no significant differences at the beginning or end of the study between the subgroups for measures of cholesterol, blood pressure, serum glucose or C-reactive protein.

In this study, it was shown that men taking the whole food supplement (Pomi-T) had a significantly lower median percentage rise in PSA compared to men taking a placebo (P<0.0001). The difference in percentage rise in PSA between these groups from the start to end of the study was large (63.8%), and as the patient characteristics were well-balanced and the trial had sufficient numbers to ensure adequate statistical power, the results of this study offer clinically meaningful guidance for men contemplating nutritional supplements after prostate cancer. Future trials will look at continuing the intervention for longer and include men with different stages of the disease.